Have you ever had a faucet leaking in your home and simply did not have time to fix it? You may have wrapped a rag around the base or handles to absorb the water, or maybe you tolerated the dripping and increased water bill because the leak wasn’t “that bad.” You just didn’t have the time, knowledge, or tools to eliminate the leak.

Industrial facilities such as refineries, steel mills, gas processing plants, and many others have very similar leaks. There are leaks of various types that need to be repaired. But unlike your dripping faucet, a gas leak could be very dangerous. A gas leak left unchecked could become catastrophic.

For smaller-scale gas leaks, workers are often asked to stand with handheld, portable gas monitors in this “warm zone,” putting them at risk and taking time away from other tasks. A safer and more efficient approach is to turn to area monitors. Area monitors are rugged, long-running gas detectors that have features designed to draw attention to hazardous conditions, like loud alarms and wireless capabilities.

The Radius® BZ1 Area Monitor is an ideal solution for monitoring a gas leak once you know the source. The Radius BZ1 can be placed in the area to monitor the source and make certain that the gas leak stays in check. Automatic LENS® Wireless communication to other monitors in the area allows you see gas readings from a safe location up to 1.5 km (5,000 ft) away, while iNet® Now Live Monitoring provides instant updates that can be monitored from a central control room. A variety of sensor types allow the Radius BZ1 to monitor leaks of various combustible gases against the Lower Explosive Limit (LEL), or toxic gases such as hydrogen sulfide, ammonia, or sulfur dioxide which may leak and become hazardous to workers in the area or a danger to the community.

But what happens when you have a serious leak and you don’t know where it’s coming from or how to stop it? Or even worse—what if you don’t even know you have a leak? Depending on the chemicals being released, their rate of release, and local weather conditions, the situation could quickly put the lives of your workers and neighbors on the line. 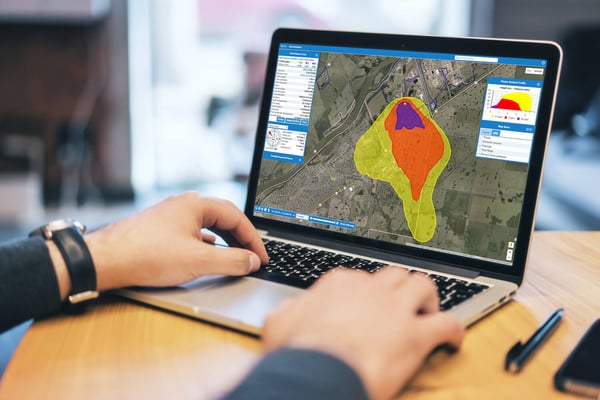 In situations like this, pairing area monitors with dynamic plume modeling software allows you to resolve the gas leak quickly and easily. Dynamic plume modeling software like SAFER One™ incorporates real-time data from area monitors, like the Radius BZ1, and weather sensors into advanced algorithms to tell you what contaminant is being released, where it’s coming from, and where the plume or cloud is going. With this information, you can pinpoint the source of the leak and identify the areas that will be affected within a two-hour window, allowing you to make quick and accurate safety decisions.

With live data on the size, speed, and path of the hazard, you can see in an instant who will be impacted—both on your site and within your community—and what action to take to reduce risk. Plume modeling software allows you to stop “guesstimating” the gas dispersion path, so you can take the right steps and operate with confidence during a chemical emergency.

The next time you have a gas leak call on the Radius BZ1 and SAFER One to monitor, mitigate, and respond to the situation.

Ventis MX4 vs Ventis Pro5: Which Multi-Gas Detector is Right for You?