Why Switch to a Long-Life Oxygen Sensor

There are many ways that sensors in a gas detector can go bad. You might drop an instrument and damage the sensor inside.  You might be in an environment where the ambient gas can poison sensors. You might be in a high humidity environment that can affect the accuracy of gas readings. All these external and environmental effects important to consider, but have you ever had to service or replace a gas detector because the oxygen sensor was simply “too old”?

Oxygen sensors, like all other electrochemical sensors, lose sensitivity after long periods of use. Traditional O2 sensors last, on average, around 2 years, but compared to other electrochemical sensors, such as H2S and CO which last typically over 4 years, the O2 sensor under-performs. Aged O2 sensors are one of the most common failures in gas detectors, and can be a pain point for users who have to constantly spend time and money to have sensors replaced.  Luckily, there are now long-life O2 sensors for gas detectors, something that users have wanted for quite some time.

Long-life oxygen sensors are a newer way for gas detector users to address one of their biggest pain points. With proper maintenance (like calibrating and bump testing), these sensors can last up to five years, a significant step up from the typical two-year life span. A longer lasting sensor can lead to fewer failures, less time spent on servicing instruments, and less money spent on repairs and replacements. Additionally, these longer lasting oxygen sensors are usually lead-free, a great benefit for the environment. There is also little difference in price between these and the traditional O2 sensors. 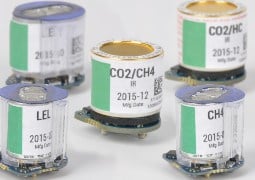 The long-life oxygen sensor is designed to perform
in the field for three to five years, solving the common
gas detection industry problem of traditional oxygen
sensor failure after eighteen to thirty months of use.

The lead-free, long-life O2 sensors are an improvement over traditional O2sensors, but they do function differently because they are biased sensors.

Although these differences might sound disconcerting, they are likely minor to the majority of gas detection users.

Sensor stabilization is also required when one of these long-life O2 sensors needs to be replaced. When the old oxygen sensor is nearing its end of life, the user may order a replacement sensor. The long-life O2 replacement sensor comes with a coin cell battery that keeps the sensor biased until it is installed in an instrument. Even with the coin cell battery, when the sensor is replaced, the instrument will bias the sensor to stabilize it to its optimal level. This process typically takes less than 15 minutes.

With all that said, if users keep their instruments charged and functional, they should not have to worry about the differences in use or functionality.

Want to learn about what could be poisoning your sensors? Read about common sensor poisons and inhibitors.

Take the Pain out of Gas Detector Maintenance

Subscribe to The Monitor Blog to get monthly updates

How Much Space Does an Area Monitor Cover?

Why Do I See Negative Readings on My Gas Monitor?

What are the Common Sensor Types in Gas Detection?