Despite the significant strides the industry has taken over the last few decades, the danger of working with chemicals means emergencies will happen, regardless of our best planning and safety efforts.

Chemical releases of all sizes happen daily. While there is no way to quantify the cost of lives lost in these emergencies, a major chemical incident can carry a price tag of more than $80 million. A single event could cripple a facility with dozens or hundreds of lawsuits and force it to operate at a fraction of full capacity.

This is why it pays to include proactive strategies in your chemical emergency response plan. In the wake of a chemical release, mere seconds can make the difference between successful crisis mitigation and disaster.

Plume models are a vital tool you can use to plan for and manage a chemical release. However, most facilities rely on static plume models, which use data input manually to simulate the potential dispersion of a gas cloud.  On the other hand, dynamic plume models provide more accurate information and faster.

Which option is ideal for your facility? Let’s review the differences between static and dynamic plume modeling.

There are both free and paid-for static plume modeling tools that generate threat zone estimates for a variety of chemical hazards. Static models calculate how quickly the chemical is escaping, predict how that rate might change over time, and estimate the areas that will be impacted based on the information entered into the software. Additionally, these models allow you to model different hazard types and release scenarios.

Static models are commonly used to maintain compliance with EPA regulations. Facilities that use hazardous substances are required to submit a Risk Management Plan (RMP) to the EPA every five years. An RMP needs to include loss of containment scenarios, including worst-case and most-likely case scenarios, which a static model can create.

Static models are also popular for performing process hazard analyses, which are performed ahead of certain tasks. If a worker must put a new flange on a valve of a storage tank containing ethylene, a process hazard analysis is necessary. The worker manually logs all the necessary information and uses a static model to determine the worst-case scenario if a release were to occur.

In order to create a plume with a static model, you must manually enter all the necessary information. In some cases, this information may not be available, so you must rely on your best estimate. With this in mind, the plume generated by a static model will never be up-to-date. By the time the information is properly entered, it’s already old. It’s like trying to predict the winner of a race from a photo taken right after the starting gun.

The Benefits of Dynamic Plume Modeling 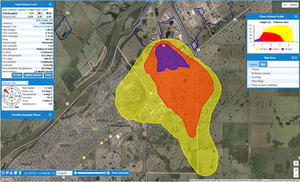 Fast response time is vital to minimizing the damage of a chemical release. Dynamic models automatically incorporate real-time data from on-site gas and meteorological sensors to generate an accurate plume model, then track and monitor all aspects of a chemical release in one place from start to finish.

All of this information is overlaid on Google Maps™, allowing you to see what areas of your facility will be affected and whether the release will impact the community. If the chemical event in question threatens to extend beyond the bounds of your facility, evacuation routes and traffic control become critical. Dynamic models allow you to see where citizens need to evacuate and whether traffic bottlenecks could pose safety risks, so you can create an alternative plan.

In the event of a chemical release, responders often face an "information gap" where they must wait for answers. Knowing where the release occurred and having a system that monitors the facility answers most of these questions, allowing responders to take decisive action quickly, saving valuable time and lives.

As winds shift, so does the plume model, in real time, giving incident commanders and responders the most accurate information about the incident. Accurately predicting the dispersion path, potential impact, and source of a chemical release allows you to communicate with confidence during an emergency.

Without this real-time information, you’re left using guesswork to predict where the plume might spread. This leaves you preparing emergency crews, your workers, and the community for the worst-case scenario, which is not only less efficient, but also expends unnecessary resources, creates panic, and increases costs. With a dynamic plume model, you can create and share up-to-the-minute reports with stakeholders to ensure everyone has the information they need to respond swiftly and safely.

How to Use Dynamic Plume Modeling for Safer Worksites and Communities

Subscribe to The Monitor Blog to get monthly updates