Why are my SO2 Sensors Failing Early?

“Why are my SO2 sensors failing early? Wait … now they're fine. What’s going on?” It’s a scenario we’ve heard numerous times. While sulfur dioxide (SO2) sensors are typically expected to last between two and five years, there are situations in which they may seemingly fail early. They may then go on to recover without any user intervention.

Before we discuss why SO2 sensors may fail early, first let’s review how Industrial Scientific measures the life span of our sensors. During sensor calibration, the raw sensitivity of the sensor is measured and then a calculation is used to translate that sensitivity to a number. That number, called the “span reserve,” provides an easy way to know when a sensor is nearing the need for replacement. If a sensor has a span reserve of over 100%, it’s in new condition. If the span value is between 70% and 99%, the sensor is in good condition. When the value is between 50 and 69%, it’s time to begin planning to replace the sensor. Once the span value falls below 50%, the sensor will fail calibration and must be replaced. In most situations, the degradation of a sensor is linear and gradual. When it is not, we know that an external factor has had an impact on the sensor's life.

The common thread in instances where SO2 sensors behave erratically is the environment. In climates where bitter cold and low relative humidity prevail for weeks on end, SO2 sensors are likely to have a reduced span.

The effect of low humidity on SO2 sensors is significant. For example, the chart below shows the results of continuously exposing an SO2 sensor to 11%RH. The span drops over 50% in a month until it reaches equilibrium at that low humidity level. The sensor has 50% span remaining after about two months. 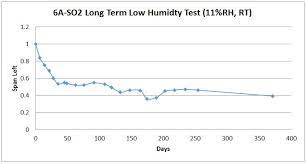 Why Are SO2 Sensors Sensitive to Environmental Factors?

Simply put, the chemical makeup of SO2 sensors makes them susceptible to the environment. Inside SO2 sensors is a water-based electrolyte. This electrolyte can easily lose its water under low humidity conditions, decreasing its mobility and hampering its ability to participate in the chemical reaction cycle inside the electrochemical sensor. Its freezing point also varies with the concentration change due to environmental changes. In cold weather, the concentration change makes it easier for the electrolyte to freeze, again causing it to lose its mobility. This reduces the sensor sensitivity significantly and can cause the sensor to fail calibration.

Why do SO2 Sensors Recover?

While the electrolyte in SO2 sensors can easily lose its water under low humidity conditions, it can also absorb moisture from the air. This increases the ion mobility and causes the sensor sensitivity to recover. You’ll find that the sensor will then pass calibration.

The results of increasing and decreasing humidity can be seen in a long-term review of an SO2 sensor’s span history. For example, in the image below, the wave pattern indicates that the sensor span is low in winter (January-February for the northern hemisphere) and high once when it recovers under warmer temperatures and higher humidity.

In short, the sensor loses sensitivity when it’s cold and dry outside, but it recovers once warmer temperatures and higher humidity return. 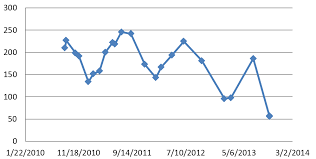 What Can You Do?

Given what we know about SO2 sensor behavior, the proper care and storage of the sensor can go a long way in preserving its life span. To avoid sensor dry-up, store gas detectors and spare sensors in a cabinet or room which holds relatively high humidity in winter. For example, placing a humidifier in an equipment storage room can prevent SO2 sensor problems. Another option is to use a Cigar Cooler Humidor which holds the humidity at 60%-70%RH.

A dried SO2 sensor can often be recovered. A quick and easy way to restore moisture to the electrolyte is to place the sensor in a plastic zippered storage bag with a damp paper towel and store the bag in a warm location. The sensor will typically recover overnight.

While we know that the chemical makeup of SO2 sensors makes them susceptible to cold temperatures and low humidity, there are steps we can take to extend the life of a sensor. Something as simple as a humidifier can greatly offset the damage caused by the environment. We can even restore a sensor that has failed calibration by exposing it to a humid environment for a few hours. If nothing else, summer will return and, while we’re all enjoying our beach days, our SO2 sensors will be enjoying the return of warm, humid air.

Take the Pain out of Gas Detector Maintenance

Subscribe to The Monitor Blog to get monthly updates packed with insights.

Is a Pumped Gas Monitor Right for Your Application?

Why Our Need for Connectivity Should Include Gas Detection