What are the Common Sensor Types in Gas Detection?

Catalytic diffusion sensors are the most widely used devices for the detection of combustible gases and vapors. These sensors start with wire being wound into coils. These coils are then doped with two types of catalysts: one to make the element active and one to make it blind. These different coils are then matched into pairs of reference and sensing elements. This forms a combustible gas sensor.

This sensor is then placed into a circuit, where a fixed voltage is applied across both elements, causing them to heat up to very high temperatures. The sensor is also connected to a balanced resistance, a Wheatstone bridge, which detects changes in the resistance of the sensor's elements. When a combustible gas comes in contact with the sensor, the active element begins to burn the gas causing it to increase the temperature. The temperature of the reference element remains unchanged because it is incapable of burning gas. The increased heating of the active element causes an unbalance in the circuit and this is interpreted as a positive combustible signal. 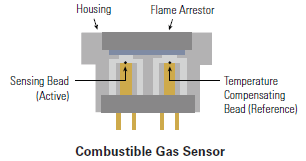 Because combustion is taking place within the sensor chamber the sensor must be designed and built in such a way that it is intrinsically safe and will not act as an ignition source in the event it is exposed to a combustible atmosphere. This is accomplished through the use of a flame arrestor. This device, usually made of a sintered material, acts as a cooling path for gases escaping the sensor. Only units that have been tested and approved by third party approval agencies, (UL, CSA, MSHA, FM or CENELEC) can be trusted to be intrinsically safe.

The basic components of an electrochemical sensor are a working (or sensing) electrode, a counter electrode, and usually a reference electrode. These electrodes are enclosed in the sensor housing in contact with a liquid electrolyte. The working electrode is on the inner face of a Teflon membrane that is porous to gas, but impermeable to the electrolyte.

How Much Space Does an Area Monitor Cover?

What You Need to Know about Sensor Poisons and Inhibitors

Why Do I See Negative Readings on My Gas Monitor?